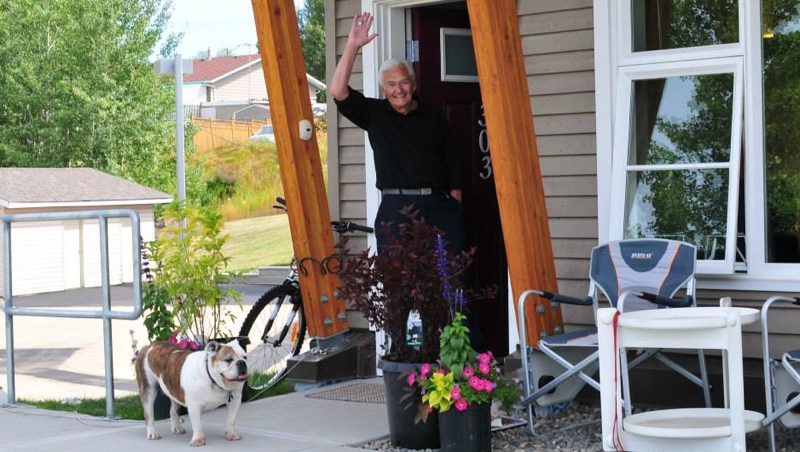 Sadly, I must inform you that Swami Harinanda passed away early in the afternoon on Tuesday, August 19, 2014. His death came quickly and without pain. As per his wishes there was no service nor memorial, although he would have appreciated donations to the SPCA or any animal shelter that you like. It goes without saying that this one–of–a–kind and great man will be greatly missed.

I first came to know Swami Harinanda around 1995. He was a customer of mine. One way or another, we got talking about spirituality and he mentioned to me that he was a swami. I must admit, I thought he was joking. But then I realized he was serious. We corresponded by email. Amazingly, I still have a printed copy of his early emails to this day.

Swami Harinanda was able to answer some of my basic questions about yoga and although I had started on the yogic path before I met him, talking to and knowing Swami Harinanda helped make my path more clear.

I was lucky enough to have met Swami Harinanda for the first time in April, 1996. I can remember the first time I met him as I drove up to his house. He came outside to greet me — I felt a great sense of joy and calm come over me.

The next day, Swami Harinanda personally taught me the science of yantra yoga at his dining table. I wrote down the principles of yantra yoga on both sides of a blank piece of paper as Swami Harinanda talked. It was a beautiful moment for me — finally my teacher had come. These lessons I still have to this day and still act as my foundation regarding yantra yoga.

While building the real yoga web site, Swami Harinanda didn't know what information we should add. So I suggested to him that we should add informaton that is not easily found elsewhere regarding real yoga. I told Swami Harinanda that myself and others want to know why we should practice yoga, what are the types of yoga, who are some famous yogis and a lesson in pure hatha yoga. So this is what we did. I asked the questions, Swami Harinanda wrote the content.

Swami Harinanda did not go to meet Ramana Maharshi in India, instead, they met on the astral plane. Ramana told Swami Harinanda that he did not need to be in a cave or anything like that to be a good student of yoga. Swami Harinanda took those words to heart and lived a normal life while being totally dedicated to self realization.

Swami Harinanda knew many little or lesser known things about yoga. He really studied the theory of yoga and put himself into a position to meet people that would impact him. Somewhere along the way he learned the Master's Chant, as an example, and many more things. Swami Harinanda would openly teach kriya yoga as well. Swami Harinanda loved the yogic life and just absorbed every little detail.

In 1996, I was personally quite ill and possibly near death. Swami Harinanda gave me the book on Karma Yoga by Swami Vivekanda to read. It was the best medicine I've ever received. From that day onwards, I fell madly in love with karma yoga. Knowing this, Swami Harinanda bestowed the name Karmananda to me. I thank him very much for this honour.

Swami Harinanda was a good teacher, a good person and a good friend.